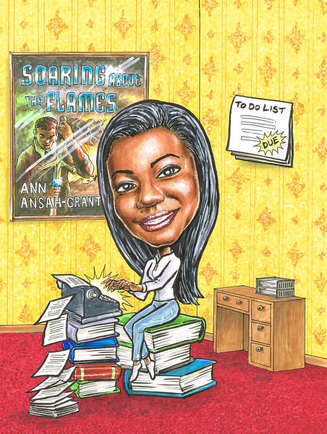 Author, Ann Ansah-Grant was born in a small town in Quebec to parents who had immigrated from Ghana, Africa.  They came to Canada in pursuit of greater opportunities for a successful life; however, they never abandoned their strong African culture. As such,  Ann's  life was filled with spicy African food, high life music and colourful kente cloth! Her parents encouraged artistic expression and this was fuel for Ann's creative spirit.  When she was only a little bigger than her pen, she began writing short stories, binding them together with wool, tape and staples to try to make them resemble real books. She was a one girl publishing company that churned out several such make-shift books that she would distribute amongst her six brothers and sisters to entertain them.  Ann says, "One of the most common questions asked to young children is, what do you want to be when you grow up? By the time I was seven years old, I had narrowed it down to two things: A mermaid or an author."  It became clear to Ann that metamorphosis into mythological sea creatures was not an option but writing certainly was and she fell in love with it.

Her writing strength was evident throughout her early academic years and she was blessed with  teachers who encouraged  her creativity.  At the age of eight Ann had her first publication - a short children's story in a local newspaper. It was then that she understood the joy of sharing her gift with others on a larger scale and she aspired to become an author by any means necessary! An English and Mass Communications program at York University polished her technical skills but the brunt of her talent was God-given and, therefore, her approach to writing was soulful.

Yet, life has a way of delaying our dreams sometimes.  Ann got married to a wonderful man, Pastor Gene Grant, and had a beautiful son, but it became apparent as the baby got older that he was not typically developing. By the time he was a toddler he was diagnosed with a severe neurological disability called Autism. With the weight of this knowledge and the level of responsibility that comes with it, the prospect of being a 'starving artist' didn't seem conducive to Ann's life as she needed to be selfless for her son.  A career in the legal industry was the "sure thing" that she felt the family needed so she said goodbye to that little girl within her with the lofty aspiration of being a successful writer.  However, Ann soon came to realize that we are all given a purpose in life and we can never truly be fulfilled, happy or personally successful unless we strive to achieve this purpose; that her own happiness would improve the lives of her entire family. She decided to let her faith in God be her impetus to pursue a future using the gift He gave her...and the rest is history!

Ann has had a poem included in an anthology called the Silent Journey published by the International Library of Poetry and she was a contributing writer for an on-line magazine called Poetic Soul. She has two novels in print currently in what she refers to as the Flames Series - SOARING ABOVE THE FLAMES and the sequel, WALKING THROUGH THE FLAMES. They are gritty spiritual warfare novels that deal with serious social issues.

When asked what advice she has for other people out there, especially "every women" like herself who are faced with insurmountable odds that make them feel like they can't pursue their dreams, she says, "I have come to realize that it is actually harder to pursue a career path that you have no passion for in the interest of perceived stability, than it is to follow your "long shot" dreams. It is like swimming upstream against a current instead of flowing into your authenticity. We all have a divine purpose in life and when you are operating within that purpose, you are a happier more valid presence in the world. We often think it is too big a sacrifice - but what are we sacrificing when we forfeit our gifting for security. Security is more than tangible currency! That said, follow your dreams aggressively with a spirit of faith! Go at it hard! Find your bliss and live according to your truth in all things that you do. Sow seeds of faith and cultivate them with hard work. Prosperity and joy will inevitably become your harvest!"

Ann operates under the premise of Philippians 4:13..."I can do all things through Christ who strengthens me", and upon that principle, she is moving full steam armed with her faith and her laptop!